The architect, painter, and sculptor Demas Nwoko has been operating a syncretism in between multiple architectural languages, combining Igbo Nigerian architecture, and Japanese construction techniques, since the 1970s. After studying scenography in Paris Demas Nwoko (Nigéria, 1935) New Culture Studio, 1967 and traveling to Greece, in 1962 he set up his studio in Ibadan in the southwest of Nigeria. New Culture Studio was his first architectural construction. It consists of a residence and production space with an adjacent theater. The building was built with local resources: brick, laterite and granite. Evoking Greek architecture, each entrance presents a covered gallery held up by a colonnade while the theater, a prototype, still under construction, is presented as a semicircular shape at the opening of the zenith. The decorative aspects are expressed by blending patterns from Igbo and Beninese cultures, molded and sculpted in polychrome materials. It was the architect’s first endeavor into researching and developing acoustics, the importance given to water, the modulation of natural light and to the skin of the building. This project, in parallel with post-war European architecture-sculpture, defends a new synthesis of the arts combining scenography, sculpture, design and architecture. 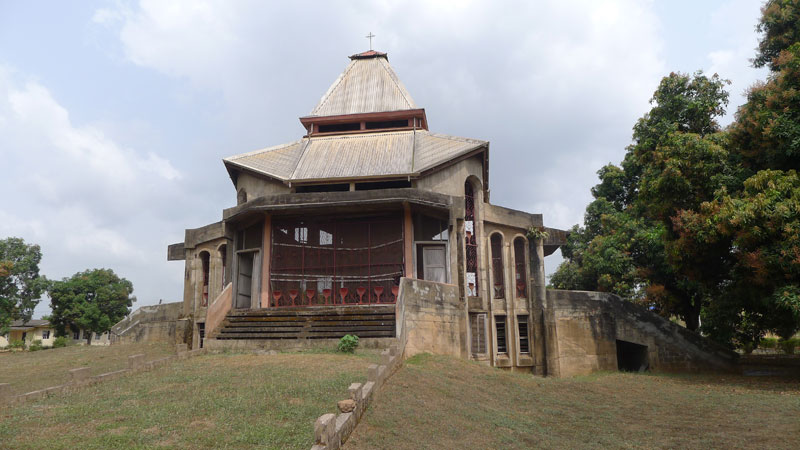