PEROU defines itself as a research-action laboratory for the hostile city, designed to combine social and architectural action, serving the “multitude of undesirables, commonly recognized as welfare cases or racially separate, but never considered as full-fledged citizens.” In the shantytowns and refuges of Calais, Paris, Arles or Avignon, PEROU designs vivid lively architecture, both physical and immaterial, magnifying the inventiveness and buildings within these multiple confines. Thus bring into light a secondary territory, absent from legal representation and formed by gestures, or acts of hospitality. Following two years of research in Calais, PEROU has instituted the 36 001st commune of France, with what it calls an “investigative work” regrouping the “evidence” gathered in Calais. Simultaneously constituted of memories and memories yet to be constituted, this archive of a commune in the making calls for the reinvention of how we imagine hospitality.

Center of Hospitality, a project for the development of Turbulences hall, designed by Patrick Bouchain, is an ephemeral and participative work created in collaboration with the collective PEROU. The public is invited to come the site, to explore, to live and to experiment the reclassification of the hall’s existing spaces into: “dormitory,” “refectory,” “parlor” and “library.” Arranged according to a system of monumental draperies, floor mats, and household lamps, the installation functions as a new public space, encouraging sharing, and alliances, around the banquet and literature. The project features a newly created installation by the collective PEROU, “36 001e commune de France” Memory of the “Calais Jungle,” a city/world today completely vanished. A stretched canvas becomes the lasting trace and writing the memorial process undertaken by PEROU over the past several years; a canvas conceived as “a shelter” text for the manifesto “Considering Calais, and its surroundings.” Archive of an evolving memory, the work is a filiation of many utopian projects within the Frac’s collection. It also explores the question of exhibiting an object in its own right where narration becomes experience, and the work exists only when it is activated. 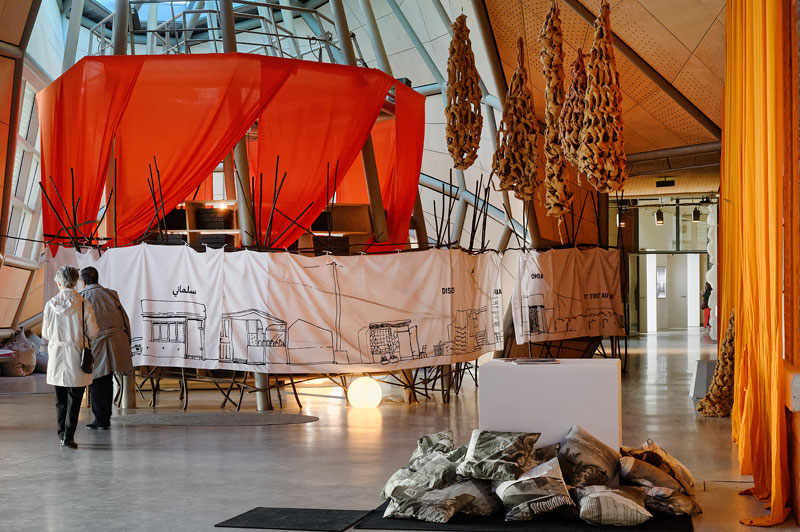