Born in Tunis, Nidhal Chamekh was marked by his family’s militant engagement. He arrived in Paris in 2008 and embarked on doing a thesis at the University Paris I. Translator for the migrants at the refuge camp in Calais called “La Jungle,” the artist, beginning at the camp’s formation, using a documentary style started gathering graphic and photographic reports. The environment created by Chamekh brings together a part of this collection as well as a video featuring a long fixed shot of the dwelling vanishing down the flames (Never give up). Proceeding the camp’s dismantling ordered by the Pas-de-Calais prefecture (Police services) in March 2016, several refugees, forced to abandon the community they built and invented together, set fire to their makeshift dwellings. Five assemblies arranged according to specific notions augment the globality of this memory: “common place,” “share,” “multiply,” “attach,” and “steal.” A large flag banner in tarpaulin blue uses materials from the camp to reinstate a national symbol. By confronting heterogeneous spaces-times these assemblages introduce discrepancies, even doubts about the history as it is stated, questioning what creates our relationship with the world, otherwise put living together: albeit contrary to how it appears, was the massive destruction of the jungle aimed at ending an unprecedented experience, the creation and living in a common shared world? 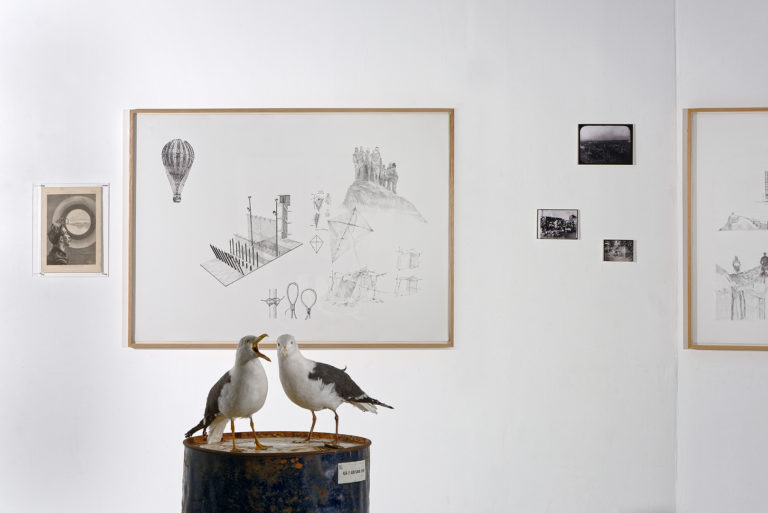