José María Yturralde joined the Computing Center of the University of Madrid (CCUM) in 1968, where he completed his first works of computational art alongside engineers, architects, artists and computer scientists before joining the Center for Advanced Visual Studies of MIT, between 1974 and 1978. These two experiences predispose him to the combining of the arts and sciences, which continues right through his most recent pictorial research. By the end of the 1960s, he was interested in multidimensional geometry and investigating the limits of pictorial space. Aware of the importance of the success of information technology and information sciences, the artist uses scientific data, which he interprets to make into aesthetic forms, like in the series Impossible Figures. He conceives geometric structures that disrupt our sensory experience and question our perception of space contrained by gravity, and based on vertical and horizontal planes. Since 1978 Yturralde has experimented in 3D using a mental construction of reality to create flying structures and Sky Art. He explores the idea of real landscapes and the environment by taking into account the contributions of Land Art, while associating the idea of an essential geometry with a notion of natural space.

The research carried out by José María Yturralde at the Calculation Center of the University of Madrid (CCUM) from 1968 onwards nourished the artist’s work by directing him towards an art that explores computational language. He worked on two and three dimensional space before focusing on the possibility of a fourth dimension. Yturralde associates his questions about space, the curvature of space-time and gravity, with primary geometrical forms, resulting from his research in optical and kinetic art. The impossible figures work conceived in the early 1970s combine art and science, and has been reproduced on two of the flags located on rue Jeanne-d’Arc. The artist’s research on space, the infinite and sublime can be found in his most recent productions. With the Enzo series, the artist considers a circle as the absolute form of the infinite, while playing with color and light as revealers of space. 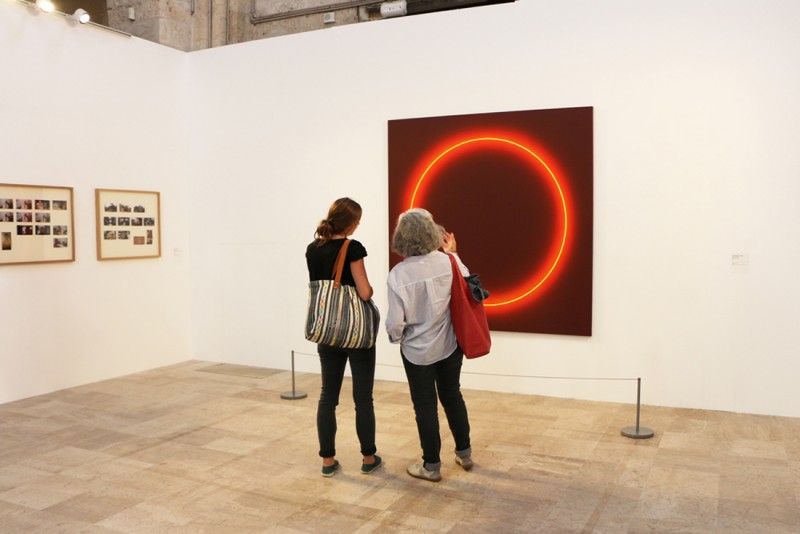