A member of the Italian radical architecture collective Superstudio since 1968, Gian Piero Frassinelli lead a professional career until 2003. As an anthropology teacher he approaches architecture as a social endeavor. For the Biennale he has written a narrative applying the real and the present to science fiction and the virtual, meditation on the future of Mankind. An oneiric drifting that blurs the structure of lecture and space-time; this unpublished text is as much in the tradition of a philosophical tale of Enlightenment as in the radical practice of fiction opened by the tales of the Twelve Ideal Cities (1971). Based on intertextuality, this méta-narrative pays tribute to historical figures such as Ettore Sottsass or Louis XVI.
In addition, a series of sketches presents the project of the Vierwindenhuis [The House of the Four Winds]: a housing complex with the four angles aligned according to the cardinal points. Created in collaboration with the philosopher Fons Elders concerning the relationship between cosmology, social behavior and architecture, the project balances social and intimate spaces. Inspired by transitional spaces in Dogon architecture (Mali), the building is built around a central courtyard and incorporates a variety of functions in each hall under the sign of an element: garden (earth), meeting space, theater (air), restaurant (fire), sauna, Japanese bath and fountain (water). This project reconsiders the question of private and public spaces while enlarging the architectural signature in the universe. 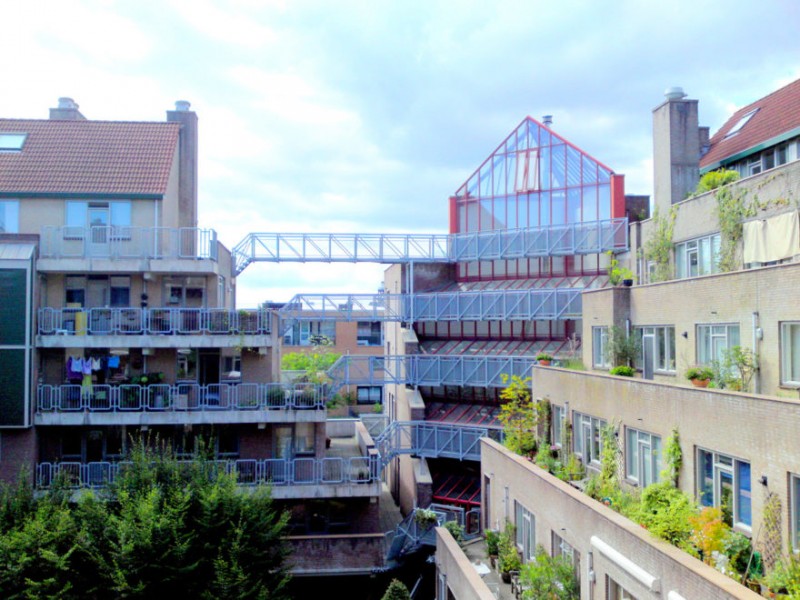