Claude Parent and Paul Virilio founded the Architecture Principe group in 1963. The oblique function would be the thread running throughout the nine issues of their magazine Architecture Principe, which were published between February and December 1966. They ended their partnership following the events of May 1968. Claude Parent was awarded the French national Grand Prize for architecture in 1979 and has been a member of the French Academy of Fine Arts since 2005. In 2009, a monographic exhibition at the Cité de l’Architecture et du Patrimoine was dedicated to this leading figure in the history of 20th century architecture. Author of many essays on speed and technology, Paul Virilio directs the Espace Critique collection (Ed. Galilée) and regularly contributes to numerous publications. He was a professor and director of the Ecole Spéciale d’Architecture and received the French national Grand Prize for Architectural Criticism in 1987.

Designed and built for the Domaine du Muy, a contemporary sculpture park, in 2010, L_e_s_ _îl_o_t_s_ _prolong over 50 years of research by the architect on the evolution of modern space towards the oblique. The inclined planes, irregular and discontinuous shapes remarkably combine to create a practicable work composed of steel bases and aluminium seats, being both furniture design and sculpture. Evoking geological fractures, these monoliths establish a new relationship between instability and imbalance. Anchored in the landscape as insular spaces, the sculptures invite the spectator to take a pause for a moment, to slowdown and retreat from the energy of the city. The oblique modifies perception of the user’s daily environment: this new point of view brings the body to a new state of receptivity, participation and adherence within the urban space. 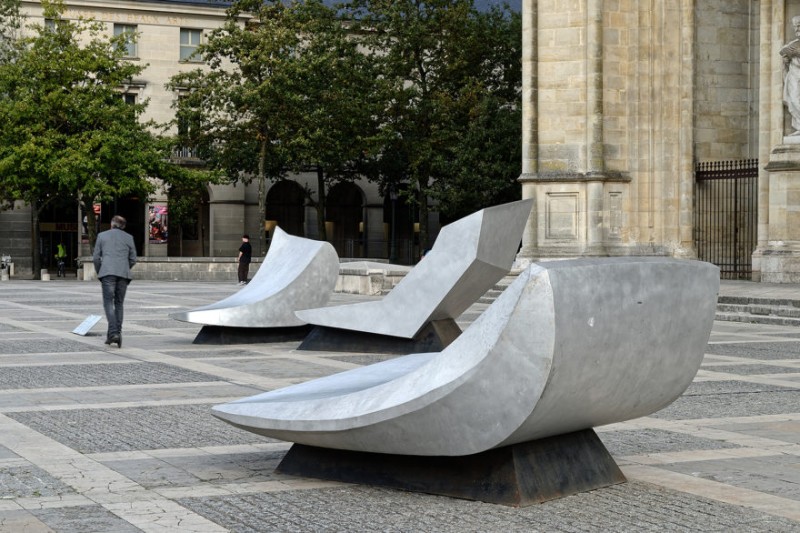