Founded in 2008 and based in Rome, 2A+P/A has from its outset focused on investigating historical models. The founders, Gianfranco Bombaci and Matteo Costanzo, while still students, both marked by a shared interest in new technologies and radical Italian architecture, collaborated for the first time in 1998 for the magazine 2A+P. For the Biennale, the agency has interpreted a drawing by the architect Ettore Sottsass Monumental Architecture (2003) whose axonometric view presents a mysterious black volume, pierced by a few colored openings with its base aligned to a tiled floor that, paradoxically, expands all the way into space of the ground floor. 2A+P/A is particularly interested by this permeability between the private and public spheres. The newly proposed narrative emanates as much from a subjective interpretation of the original image as from the agency’s decision to create an imaginary collaboration with the famed architect. The result is an imposing three-dimensional black structure with a square face of 5.5 m wide by 5.5 m high. By investigating the subtle differences between the drawing, model and its physical transposition, the agency imagines possible outcomes insinuated by Sottsass’s project: a domestic space, or in this case, a cabinet of curiosity intentionally moved into the public’s space. The pavilion becomes a reactivation of this traditional form by inventing a cabinet of architecture whose artificilia, or man made objects, become important reproductions of architectural drawings in the universe of 2A+P/A. 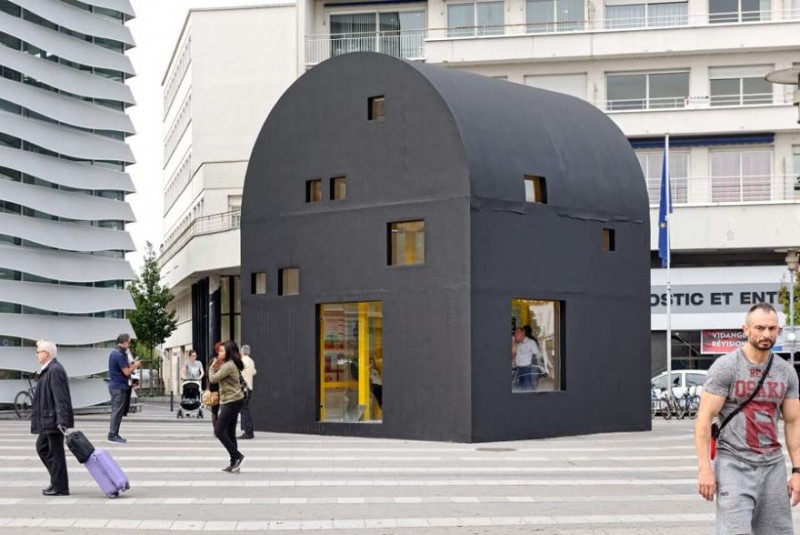